External headwinds lead to a slower but still dynamic growth

The economy will expand less rapidly in 2019, mainly due to external headwinds, with exports (180% of GDP) and domestic demand remaining the main drivers of growth. The slowdown in the Chinese economy will continue to dim exports, as it is Singapore’s main trading partner (around 14% of trade). A pickup in exports to other markets, including South Asian countries (who will benefit from the CPTPP) and the United States, will partly compensate this decline. The outlook will also continue to be dimmed by the US-China trade war and related uncertainty, as well as the deceleration of global demand growth for electronics (13.5% of exports), which poses an excess output challenge for Singapore due to growing domestic production. These headwinds will notably affect the manufacturing industry (20% of GDP). However, higher oil prices should benefit trade, as Singapore is the world’s third-largest refinery centre.

On the domestic front, the construction sector will continue to underperform, further discouraged by government measures to curb housing price growth. These measures will help to stabilize inflation, which faces pressure from rising oil prices and stronger core inflation. The Monetary Authority of Singapore (MAS) is therefore likely to continue following a tightening policy stance. Demand will continue to boost the services industry – predominantly via finance and insurance but also the retail sector – which will be helped by steady growth in the number of tourists and of disposable income. Moreover, public investments to boost economic diversification, R&D, invest in human capital, and attract FDIs will continue to be favourable to growth and business confidence.

Confirmed resilience of the financial situation

The budget balance will remain very sound. Thanks to receipts from sovereign fund investments, the country will continue to record a budget surplus while maintaining expansionary budget policy. In addition, the high level of public debt is more than compensated for by the financial assets held within sovereign funds. Bond issues are not used to finance the public debt; rather they are used to develop a local state bond market and to support the Central Provident Fund, the leading Singaporean pension fund.

The current account balance will likely run a large surplus in 2019. The surplus in the balance of trade will increase, notably as a result of the uplift in energy prices, but will continue to be partly counterbalanced by a deficit in the balance of services and deterioration of the income balances (primary and secondary). Thanks to the city-state’s role as a regional and international trading hub, downwards trends in exports are mirrored by fluctuations in imports.

Although the banking sector is exposed to property market risks, its granting of mortgages has been cautious and remains in line with regulatory requirements: the rapid expansion of credit, combined with high property prices, is not expected to present a risk for 2019. The sector is also exposed to risks associated with the high level – although deemed sustainable – of household indebtedness (above 70%of GDP) and the slowdown in the Chinese economy through trade finance operations. However, the levels of capitalisation and liquidities, the stabilizing of bad debt levels, as well as strong performances in the resistance tests carried out by the Singaporean financial authorities, would indicate that the banking sector will be resilient in 2019.

Durable stability of the political environment

The People’s Action Party (PAP) has been in power since Singapore gained its independence in 1965. Its dominance is expected to last given the tranquil nature of the social milieu and effective proactive economic policies, but also due to the lack of strong opposition figures. The term of office of Prime Minister Lee Hsien Loong ends in 2021. The PAP will elect a succession candidate internally, and if there are internal opposing factions backing different candidates, these conflicts will not be made public. The government agenda will likely stay focused on securing competitiveness to ensure long term growth. An absence of political risk, a strong rule of law, and a liberal economic structure underpin the strength of the business climate, which took second place in the World Bank’s 2019 assessment.

The amicable phase begins with the seller contacting buyers in writing, by telephone and, where permissible, by visiting the buyer’s business premises. If there is no response from the buyer, a site visit and online searches are conducted to ascertain the operating and legal status of the buyer. If the buyer does not make attempts to settle the matter amicably, legal proceedings can be used to recover payments for goods sold and delivered in Singapore. It is, however, prudent to ensure that the buyer has sufficient assets to satisfy the debt before proceedings are initiated.

Singapore is a common law jurisdiction. Its laws are principally governed by Supreme Court of Judicature Acts, State Court Acts, other statutes which have procedural application (or contain procedural provisions), the Rules of Court, practice directions, case law and the court’sinherent powers.

If a defendant fails to enter an appearance or fails to file a defence within the time specified in the writ, the plaintiff may enter default judgment against him. This can be a final judgment or an interlocutory judgment, depending on the nature of the claim.

Enforcement of a Legal Decision

A judgment can be enforced by a variety of writs of execution. These include a Writ of Seizure and Sale of movable and immovable property, a Writ of Delivery and a Writ of Distress. These writs authorise court officials to take appropriate measures to give effect to the judgment.

This can be an appropriate solution when the debtor is owed a debt by a third party (the garnishee). When the creditor garnishes the debt, the garnishee must then make payments due to him, rather than to the debtor. To collect these debts, the creditor must first apply for a garnishee order nisi. This can be filed without the involvement of other parties and leads to “show cause” proceedings. If the garnishee confirms that there are monies due and owing to the judgment debtor at this stage, the Registrar may proceed to make the garnishee nisi absolute.

If the creditor is not able to enforce his judgment in Singapore, he may be able to enforce it in a country where the debtor holds assets. This can be done by commencing fresh proceedings, or by registering the Singapore judgment in the foreign country (on the basis of reciprocity of enforcement between the two countries).

When a company is in financial difficulty but has reasonable prospects of being rehabilitated, or if preserving all or part of its business as a going concern (or even that the interests of creditors would be better served than by resorting to a winding up), the company or its creditors can apply to court for an order that the company be placed under the judicial management of a judicial manager.

If an insolvent company is unable to overcome its difficulties, it can be dissolved. This enables the liquidation of its assets, so that creditors can be repaid, at least in part. This process is known as winding up or liquidation. A healthy company can also be subject to winding up if its members no longer wish the business to continue. When a company is wound up, its assets or proceeds are first used to pay off any creditors. Following this, any balance remaining is distributed pro rata amongst shareholders. 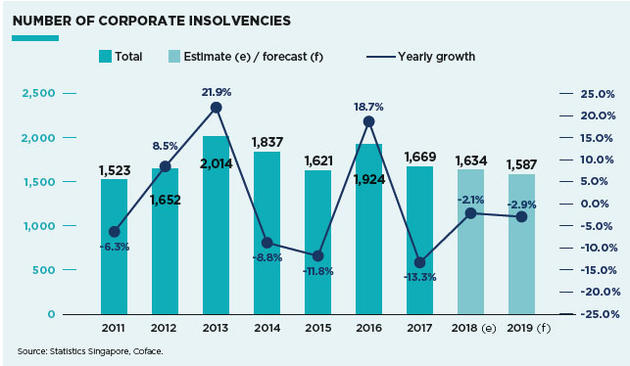